Gastric Bypass vs. Sleeve, a 2021 Update

The Gastric Bypass and the Gastric Sleeve have been the most popular bariatric operations in the U.S. and worldwide, for many years.  And while these both continue to be effective operations that help many patients achieve excellent health improvement, some new information has shifted my personal practice just a bit in the direction of Gastric Bypass.  Stay tuned to learn more!

I like to begin the comparison with the many characteristics that are the same for the Gastric Bypass and the Sleeve.  Again, for most patients these are both good, effective operations. 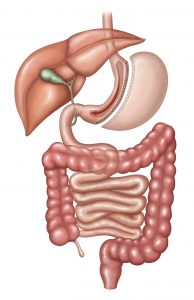 The Sleeve promotes weight loss on two levels.  Of course, there is a smaller stomach and smaller food capacity, but there’s a LOT more to the weight loss equation.

To understand the positive hormonal impact of the Sleeve, we need to understand the obesity condition is NOT just a matter of eating too much food.  For most people, that’s not even the main issue.  The underlying problem, and one that must be corrected in order to achieve lasting weight loss, is that for people with the obesity disease the energy hormones and the fat management system are out of balance.  Research shows that there is a powerful fat management system (because a little bit of fat is a survival resource), and that (for a variety of reasons that are still being researched, probably different reasons for different people) the individual’s energy system believes that they need this excess stored fat for survival.  So, the body (functioning on a powerful unconscious level) fights to hold onto the excess weight even though we know intellectually that the excess weight puts strain on the body and damages health.

This is the ‘Set Point’ theory of obesity, and the only way to achieve lasting weight loss is to change the body’s energy hormone balance or ‘Set Point.’  The great news is that both the Gastric Bypass and the Sleeve are effective in lowering the fat storage Set Point.

In the case of the Sleeve, the hormone improvement comes in part from the fact that some hunger hormones (such as Ghrelin) are made only in the greater curve section of the stomach that’s removed.  So, there’s a cool sense in which we are taking out part of the troublesome hunger mechanism.  In reality, there is probably much more going on hormonally but this description fits very well with the typical patient experience where, yes, one can hold less food, but more importantly, one wants less food in a way that lasts over many years. 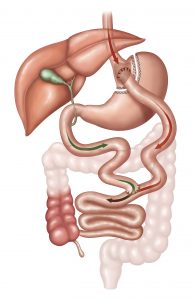 You can see there’s a really small stomach so that patients hold less food, but I promised there would be a hormonal effect for the gastric bypass, right?  And, as you can see we’re not removing that large section of stomach as we do in the Sleeve, so where does the hormone effect come from?  Well it’s kind of complicated, and probably in real life it’s a lot more complicated than this outline, but if this is too much for you then you’re welcome to jump forward and just trust that patients feel a lot less hungry over time.

For those of you who are still with us, we’re going to outline roughly what’s called the “foregut theory” of weight loss after Gastric Bypass.  This theory says that in normal non-surgical anatomy, the duodenum is an important segment of the intestine to help the body assess food and to properly utilize food.  The inner lining of the duodenum is populated with special cells that notice food (type, amount, etc) then they network with surrounding organs (liver, pancreas, etc) through neuro-hormonal reflex pathways to (theoretically) help the body respond in real time to put food to work.

BUT, in the context of the obesity disease, this system can mis-react or over-react to food so that the body does not feel satisfied or “sated” from food, but instead can create a physical desire for more food.  This does not happen to everyone, but it’s a common experience in my patients and it may happen on an unconscious (still powerful) level even if it’s not something that you’ve noticed before.

When food takes the new pathway after the Gastric Bypass, this duodenal foregut system is taken “offline,” and other backup hunger systems take over so that the body has a more natural and more balanced hunger.  So here again, patients hold less food but more importantly they want less food in a way that lasts over time.

For you science and physiology nerds, we need to mention that the mechanisms we’re describing for Sleeve and for Gastric Bypass are probably just representations of a part of what’s going on.  The obesity hormone imbalance is probably not the same in everyone who has the obesity disease, so the interactions of surgery with individual hormone situations can be different.  Research has shown physiologic changes that appear to be useful but completely separate from what I’ve outlined here, including positive alterations in the colon microbiome and changes in the chemical composition of digestive juices following surgery.  Furthermore, much of the neuro-hormonal signaling is happening over a distance of just centimeters or millimeters; these functions will take many years for full elucidation.

There’s another important feature of this hormonal effect for weight loss, a feature that’s shared by both operations.  I’ve been telling you that the Obesity Disease shows up as an imbalance in the energy control system and the energy hormones, an unhealthy elevation of the set point for fat storage.  I’ve just now told you that both the Sleeve and the Gastric Bypass have a direct positive effect on that energy hormone balance, leading to a lower set point for fat storage.  It turns out that neither operation interferes with proper function of the nutrition control system, so that after Sleeve or Gastric Bypass patients do have hunger that shows up in support of the body’s actual nutritional needs.  This means that patients burn a lot of their excess fat but they do not become malnourished and they tend to lose an amount of weight that’s appropriate for their starting point.  To say it a different way, both operations cause patients to lose excess weight but not to lose healthy weight, whether they start at 400 pounds or just 185 pounds.

Now, you should have a good idea about the Gastric Bypass and the Sleeve in terms of  1) how they are done, and 2) how they work.

I think that a lot of the distorted information comes from Band marketing.  The story is that the Lap-Band® was approved for use in the U.S. in 2001.  At that time the primary competition in the bariatric surgery space was the Gastric Bypass, because the Sleeve did not come along until 2005.  Of course, the Band had a manufacturer, and the manufacturer had a marketing campaign.  The “educational” piece of that marketing campaign selected key medical data to make the Band look good, and the Band marketers used carefully selected surgical literature about the Gastric Bypass to make it look scary and risky.  In fact, there were literature reports from the 80’s and 90’s that showed high complication rates for the gastric bypass while the (open) surgical technique was being worked out and when surgeons didn’t understand how to prepare patients well for surgery, but these reports were pushed by the Band marketers as being a true/complete representation of the Gastric Bypass.  Ironically, even though the Band procedure is now understood to be a failure, the Band marketing lives on by means of its web presence.  Just take the web information with a grain of salt!

Now, back to a comparison between the Sleeve and the Gastric Bypass.  We’re going to compare these as well as I can in the current state of knowledge, with the understanding that information about these operations and about the obesity disease continues to develop and it’s likely we’ll be due for another update comparison in a few years!

In particular, new information is becoming available about medium- and long-term outcomes for the Sleeve, which started being performed in 2005.  For the Sleeve, we’re only now seeing solid data for 10-year outcomes and the story may continue to evolve until we have 20-year outcomes.  There has not been as much change for the gastric bypass, which has been performed since the early 80’s and which has well-understood long-term results.

Recall that many practical aspects of the operations are the same:

Although many of the positive health outcomes are the same, there are some differences:

There are several expected differences that separate the Sleeve and the Gastric Bypass:

Moving from the expected or planned differences, we find both similarities and differences in the rate of complications and problems:

Many people are surprised that the complication rates are so similar.  After all, doesn’t the Gastric Bypass look more complicated?  Actually, the Sleeve diagram is a bit misleading.  The artist’s conception is understandably simplified, and it looks quite simple to separate the stomach sections so we can extract that excess stomach.  The real stomach anatomy includes lots of blood vessels that supply oxygen and nutrients to the stomach, and that hold the stomach in place.  The stomach is also near the colon, the pancreas, and especially the spleen.  In our patients, the stomach is often covered with intrusive/mobile fatty tissue that can make it difficult to clarify these key structures.  Your surgeon needs to divide all those blood vessels and to carefully work around the nearby organs in order to accomplish the Sleeve.  Obviously this shouldn’t scare you about the Sleeve, and the data shows a very low complication rate, but the amount of surgical work is in the same ballpark as the gastric bypass.


On balance, these are both very safe and very effective operations.

The Gastric Bypass has a bit higher rate of needing IV fluids or corrective procedures in the short term, but it balances out with somewhat better weight loss and health benefits in the long run.

The Sleeve is also very effective for most patients, and it has the advantage when the patient is likely to be exposed to ulcer-creating substances (especially tobacco) in the future.

Here are some common patient factors that favor Sleeve: